The Art of Nature: Clemente Guzman 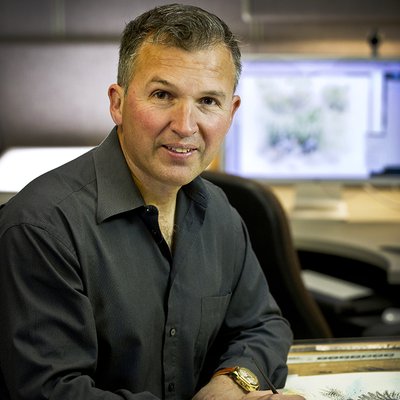 Wildlife artist Clemente Guzman is a master of pen, pencil and brush, and he illustrated Texas Parks & Wildlife magazine for 29 years. We talk to the artist about his wild work, and his journey telling the stories of nature through art. This is a segment in our occasional series, Art of Nature.

Under the Texas Sky: S1:E12: The Art of Nature: Clemente Guzman

Foundation: Conserving Our Wild Things and Wild Places for Over 25 Years.

Beauty is where you find it. And an unsurpassed place to witness a

diverse array of beauty is the outdoors.

The sights and sounds of nature are rich and intriguing. Of course, if

to capture the moment. Like when you come across a great panoramic view

Or find yourself mesmerized by the intricate design of pine cones.

her shoulder her to see if she and her pups are being followed.

home to share with friends, family and co-workers. While some of us may

document nature with a camera.... others capture the outdoors with

canyon. I'll get the...the brown, and I go in the direction of the

canyon. And I'll just fill in the area. [

Nature. It’s where we tell the story of an artist who tells the stories

of Nature through their work. Stay with us.

about nature…and people… and the connection they share…I’m Cecilia Nasti.

Today in The Art of Nature, we explore the life and work of wildlife and

spent time with Clemente this past spring, and talked with him about his

Department. You saw a lot of his work in Texas Parks and Wildlife

magazine and on brochures and posters. We

learn about Clemente’s love of nature, and where he finds the inspiration

for his highly detailed creations. Clemente shares with us his latest

honor: being chosen as a centennial artist to help

[CLEMENTE] When I'm painting with acrylics, I'll use like some

finer brushes. I'll have a cup of water and then I'll start painting.

wildlife in his teens. He's always had a love of nature and the outdoors.

[CLEMENTE] I love nature. I like being outside. There’s a lot of

things that might inspire me, especially the light, the light, how in the

morning, like, when you’re walking on the trail…you see something that

the light is just hitting it the right way. And it does something in me

where, oh, man, that’s nice. That’d look nice on a painting, you know. It

just moves you. And that’s when you know that, you know, you got to do

something, you know. It’s a calling.

a freelancer, primarily creating artwork for ad agencies. Until one day a

that higher calling. Not one at a seminary. She was talking about a

conservation calling... at a state agency known as Texas Parks and

[CLEMENTE] One of my clients, she said, man, you’re good at wildlife. You

should call them. And, she called them for me, set up an appointment,

and I went out there and I met Pris Martin. She was head of graphics. She

told me, there’s no positions open. I said, well, that’s okay, but if you

could see my portfolio and critique it, see where I need improvement. I

really would appreciate that. And she said, sure, come in any day. So, I

called her one day, went out there, and showed her my portfolio and she

was blown away. She said, man I love your work. When I have a position

open, I’m going to call you so you can come and interview. I said, sure I

would appreciate that. At that time, man, I was looking for work

desperately, you know. I was doing freelance work and I was working at a

daycare center. It changed my life coming to work for Texas Parks and

[RANDALL] And change his life it did. Clemente spent 29 and a half years

at the agency creating artwork for hunting guides, conservation stamps

and license plates, posters, brochures as well as the Texas Parks and

[CLEMENTE] Texas Parks and Wildlife has given me a lot of

perspective towards wildlife and wildlife conservation. That’s part of

painting. That’s part of that excitement that I’m looking for.

[RANDALL]For Clemente, the excitement comes from his continued

inspiration by the natural world around him. He insists that nature has

its own energy that draws you into it. And where it leads you is up to

[CLEMENTE] A hawk. Watching a hawk fly over you, it just passes

right in front of you, you know. It just an experience that you were not

expecting it, and it just crossed your path for a reason. I believe

things happen for a reason. But, you know, it’s things like that that

drives me, and I could have an idea in my head already planned out, when

different direction, that’s how inspiration works. So you got to

follow it when you see it, you know, and it leads you to something else

[CLEMENTE] I create art because it inspires me, it moves me.

When I’m not inspired, I don’t feel like painting. And being out in

nature does that to me. It has that magic. You know when you have it

because you can’t sleep. You know, you’ll get up…it’s like falling in

love, you know, you’re just thinking about it all the time.

about nature…and people… and the connection they share…I’m Cecilia Nasti.

you stories from Under the Texas Sky. In fact, since 1991, the Foundation

has raised more than $190 million to conserve the lands, waters and

wildlife of our state. You can help by becoming a member. Find out how at

WeWillNotBeTamed.org Something else that will not be tamed is the work of

brochures, posters, stamps and more. This past spring, Producer Randall

Maxwell spent a day with Clemente, getting to know the artist and his

people of Texas through his work for Texas Parks and Wildlife. He's

but by no means is he putting away his brushes. In fact, you might say

he's graduated to the rank of Centennial Artist. You see this all came

to create paintings commemorating the upcoming 100th anniversary of Texas

[CLEMENTE] To be a Centennial painter, that’s like from the

creator. That’s how I feel. You know, I looked up on the internet, the

other artists. They’re extremely good painters. So, I’m up for a

challenge. You know, and I’m looking forward to it.

[RANDALL] Clemente was commissioned to create paintings for three

Somerville State Park. All of which are just a hop, skip and a jump from

his home in San Antonio.

And that first hop... was to get inspired.

capture inspiration. But once he hit the park's trails, he quickly

realized the canyon's spirits were already communicating with him.

[CLEMENTE] The canyons to me are very inspirational. When I

run into a canyon, I say, man, people probably lived here, you know,

going especially back hundreds of years ago, maybe to Native American

times, uh, they lived probably underneath it, you know, thinking, well,

man, I’m walking right on their path, you know. That, to me, is powerful,

like…or it could be an abandoned building, you know, from an old farmer,

rancher, in the same spot that you’re standing, and you think of, how

many people walked in that same little spot you’re on? And it could be

humans or animals, you know. It just, to me that’s fascinating.

[RANDALL] Clemente loved the ruggedness of the habitat in Government

Canyon. And while he saw a lot of wildlife on the trail, two images stuck

with him. The park's 110-million-year-old dinosaur tracks and a small

[CLEMENTE] I took some pictures and got my mind thinking, I

inside a dinosaur track. I got those elements together, the dinosaur

footprint and the lizard. It just fit beautifully, the angle of the

lizard and the footprint. I’m going to paint that for Government Canyon.

[RANDALL] Marrying the past with the present. What a great representation

just on the canvas, but also on the conservation of native habitats. He

feels if we don't leave any space for wildlife, they won't have a home

and he won't have anything to paint. But he's hopeful his artwork will

inspire others to cherish and connect with

[CLEMENTE] When somebody looks at my painting, I want them to

feel the experience that I experienced, the excitement, the inspiration

that I got. You know, some people, they don’t go out to the parks. But,

the parks has tremendous benefit into our mind, body, and soul. Just by

being out there with your family, or by yourself—just hiking, biking, it

molds a person into something better.

We agree, Clemente. Life is better outside. Out on the trail with

Thank you, Randall. The book celebrating the 100-year anniversary of

Texas State Parks, featuring the work of Clemente Guzman and 30 other

public exhibition of the paintings at the Bullock Texas State History

on the next season of programming, which begins in April 2020. We’re

working on shows about women in conservation, rainwater harvesting,

paddling in Texas, our Texas state park system, wildlife like bats and

Meanwhile, we invite you to revisit the past year’s shows—or hear them

for the first time. AND…we’d love for you to get involved in the podcast.

Send us your story ideas. Tell us what you’d like us to talk about on the

Another way to get involved is to send us your Shout Out to the Wild.

impression about the great Texas outdoors. And we’ll let you share it

yourself with podcast listeners right on the podcast. Who loves you? Just

go to underthetexassky.org and click on the “Get Involved” link. We’ll be

And so, we come to the end of another podcast. Under the Texas Sky is a

production of Texas Parks and Wildlife and is available at

UndertheTexasSky.org or wherever you get your podcasts.

We record the podcast at The Block House in Austin, Texas. Joel Block

does our sound design.

I’m your producer and host, Cecilia Nasti, reminding you that life’s

better outside when you’re Under the Texas Sky.

Foundation: Conserving Our Wild Things and Wild Places for Over 25 Years.

[CLEMENTE] I create art because it inspires me, it moves me. And

being out in nature does that to me. It has that magic …it’s like falling