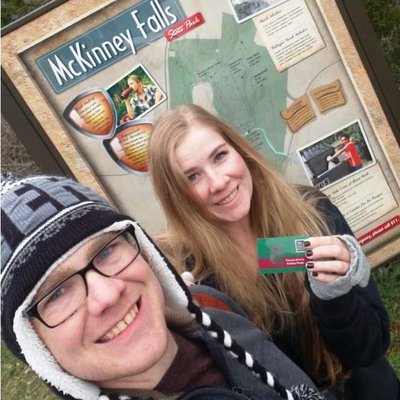 Cecilia Nasti: From Texas Parks and Wildlife…. this is Under the Texas Sky …a podcast about nature…and people…and the connection they share…I’m Cecilia Nasti.

In our debut podcast we introduced you to siblings Cassandra and Christopher Neve of Austin. They’ve been estranged from the outdoors since they began adulting and decided to change that sad condition in this New Year.

They’re off to a great start, too. On January 1 they went on a First Day Hike at McKinney Falls State Park in Austin; what follows is from their audio diaries.

Park Employee: Hi. How may I help you? One?

Cassandra: We have three adults, but I have this as well.

Cecilia: What she had was a Texas State Parks Pass, which provides unlimited free entry to more than 90 state parks for its holder and their guests.

Instead of joining one of the scheduled tours led by a professional park interpreter, Cassandra, Christopher and their significant others decided to strike off on their own and take the path less traveled.

Cassandra: Okay. So, Christopher and I are doing our first day hike at McKinney State Falls…McKinney Falls State Park?

Cassandra: It’s January First, so, for our commitment to the outdoors…

Cassandra: …we’ve decided to do a hike. As Christopher gets distracted.

Cassandra: But, Christopher is leading us on this hike. So, the rest of us—we’re here with my boyfriend Justin and his [Christopher’s] girlfriend Remy. Don’t actually know what we’re doing. But we’re going to follow him.

Cassandra: You guys want to go hike down? Or…

Christopher: I’m pretty sure we’re now on the blue trail. Here. Actually, what is number four?

Christopher: No we’re not.

Cassandra: We literally parked right there.

Christopher: That sign map? Said we’re right here. When we took a right, we met up with this other path. Yeah, isn’t this? No…I don’t know. Sorry.

Cassandra: You got this?

Cassandra: We literally…we literally are right here where the water is, right?

Christopher: I got confused because there’s no parking over here. Like, yeah, you’re right. This sounds like exactly where we are, but there’s no parking. That’s in the actual park. See, like…I am positive we’re here. So, we go left…down…and we should find Old Baldy. A bald cypress tree. To the left!

Cassandra: Your other left.

Cassandra: So, over there—do you see across the way there?

Cassandra: Those are the upper falls. And I only know that because that’s where mom and I met up with one of her friends for that cacao ceremony…that we regretfully did…

Christopher: I don’t think we’re going to be able to go all the way across.

Cassandra: I guess we’ll find out.

Christopher: But I wanted to go on the bridge. There’s a little pool.

Cassandra: I wonder what the barricade is for?

Cecilia: Cassandra and Christopher promised me they did not breech the barricade; such barriers are put in place the protection of park visitors. Eventually the foursome made it to Old Baldy and other areas of the park for an invigorating first day hike.

Cassandra: All that walking. All that hiking. Almost lost the map, and we didn’t get lost until…what? Until we tried to find the car. Now, we don’t know where the car is.

Christopher: There’s a lot more people here now than there was when we got here.

Cecilia: They located their car moments later despite the swell of humanity. Even though things didn’t go quite as smoothly with their outing as they envisioned, they told me they all had a great time and look forward to exploring more Texas State Parks throughout the year.

This bonus feature is a production of Texas Parks and Wildlife. Joel Block is our sound designer. And I’m Cecilia Nasti reminding you that life’s better outside Under the Texas Sky.