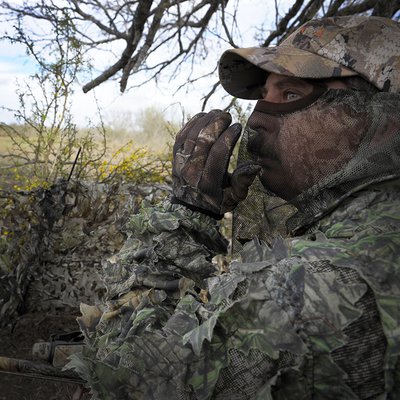 Increase your chances of harvesting a longbeard this spring by "talking turkey." Hunter Education coordinator Steve Hall demonstrates the various ways to call turkeys to you in the field.

UNDER THE TEXAS SKY: S2E2: CALLING ALL TURKEYS

You only need to hear it once…that eerie undulating sound…rising above the serenity of the dawn chorus on a misty spring morning at sunrise… for it to be etched into your memory forever.

Wild turkey once blanketed this country. And we have a long tradition of hunting them here in Texas. These big birds probably even helped to keep some of our earliest ancestors from starvation.

For most of us turkey means a commercially raised bird served once-a-year at Thanksgiving. Not everyone, however, wants their poultry pre-packaged. And so, in spring and fall, turkey hunters flock to leases and public lands to harvest these big birds for the table.

The 2020 spring Rio Grande turkey season runs through May 3rd in the South zone and through May 17th in the North Zone. And the spring season for Eastern Turkey in East Texas is April 22 through May 14.

If you’re turkey hunting for the first time or the fortieth, this podcast is for you. It’s about the Call of the Wild…Turkey.

[Cecilia] What were you doing, and what was that in your mouth?

[Steve] This is a diaphragm turkey call. And what I was doing was mimicking the sounds of a hen turkey. And in the wild, you know, the hen turkey in the springtime lets the gobblers know where she is, and she’s ready to be mated and lay on a clutch of eggs.

It’s spring turkey hunting season in Texas. Hunters ought to encounter plenty of jakes and older toms on the landscape; patient hunters have a good shot at a long beard this spring. Wildlife biologists with Texas Parks and Wildlife say weather conditions over fall and winter encouraged a productive nesting season, which may make for exciting hunting ahead.

[Steve Hall] To lure in a big gobbler is kind of like a trophy or an award for a lot of turkey hunters. But, truthfully, just calling in a bachelor tom [is exciting]—we call those silent toms—because they’ll come in silent. [That’s] because if they make a sound, the big tom will kick their booty.

[Steve Hall] It’s kind of like a chess match, you know. Because, here’s a gobbler and as he’s going around the woods with his harem; he’s expecting you to come to him if you’re a lone hen out there.

And so, the chess match begins, because you’re trying to lure him in, to a lone hen, when he has all these other hens around him.

By the way, only male turkeys gobble. Steve says biology drives tom turkeys to leave their harems to seek out these lone females.

[Steve Hall/Cecilia] In the springtime, they’re ready to mate. And they’re going to mate with several hens. And as they do, they have that biological urge to make sure that they have the biggest harem that they can support. Because, you have all these other young toms, young gobblers looking out to try and mate some of those hens, too. And, of course, he’s actively defending that harem. Well, here you have a lone hen talking over there…. And the biology of it all is that every day that he breeds a hen, she goes lays an egg into her nest, and then once the clutch is ready, she incubates them. So, when she’s incubating, she’s sitting on her nest a longer period of time. So, the gobblers get a little lonely towards the end of that cycle. And as they get a little lonelier, they get a little more desperate to find some more hens out there, because they’re still ready to breed.

[Cecilia] And so is that tip hidden in there as to when to go out and turkey hunt? You know, wait until they start getting lonely further into the season?

Whether you’re hunting turkey in the spring or the fall, Steve says you have a choice when deciding how to call them in. You can use friction calls, mouth calls or natural voice.

[Steve Hall] And as you hear that in the darkness of a roost, you know, that’s what gets your blood pumping as a hunter, because you’re—oh, you there they are—you know. Now I know where you’re at and I know how to position myself, hopefully for a clean kill later on.

You might choose to imitate a gobble instead of a hen’s cluck…you’d do this to try and fool dominant male turkeys that there’s a newcomer in the vicinity that’s going to put forth a challenge.

Natural voice calling doesn’t depend on anything but your innate ability and some practice. A mouth call may involve using a diaphragm as Steve demonstrated earlier in this segment.

Because turkeys have exceptional eyesight, the smallest movement can alert them to your presence. Natural voice and mouth calls allow hunters to remain nearly motionless while beckoning birds.

Not so with friction calls. While those types of calls are effective…

…they may involve scraping a paddle against a hollow wooden chamber …

…or dragging a peg across a slate surface. Movements… when spotted by the sharp-eyed turkeys… may cause the birds to flee.

Hunters can also use locator calls to aggravate roosting toms into giving away their position. Locator calls include owl hoots, crow calls, coyote howls, peacock calls as well as turkey gobbles. Locator calls are meant to induce a reflex gobble from a boss tom. And this provides hunters with a general idea of the roost site, which allows them to get into proper position before the sun comes up.

It’s not unusual for turkey hunters to take more than one type of call into the field.

Those are about the different calls you want on you when you’re turkey hunting. Make different little sounds, because all the sounds of the turkeys are a little bit different here and there. And if you can match the boss gobbler, that might just be the sound that turns him on to your location.

… learning how to call them to you, will give you the best shot possible.

Hunters, meanwhile, should refer to the Outdoor Annual on the Texas Parks and Wildlife website or APP for spring hunting locations, bag limits and what to do post-harvest.

Before we go, we want to invite you to get involved with the podcast. Become a member of our pod squad, if you will. Let us know what you want to hear on the show…or share some of your experiences, impressions and overall thoughts about the outdoors on our occasional Shout Out to the Wild segment. Just click on the Get Involved link on the menu bar send us a message…and we’ll be in touch.

And so, we come to the end of another podcast.

Under the Texas Sky is a production of Texas Parks and Wildlife and is available for streaming or download at UndertheTexasSky.org or wherever you get your podcasts.

We record at The Block House in Austin, Texas. Joel Block does our sound design.

We get distribution and web help from Susan Griswold and Benjamin Kailing.