Hope for the Horned Lizard 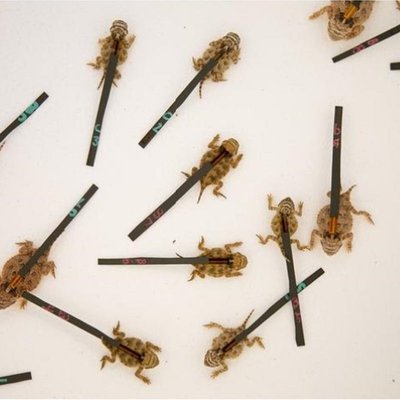 A lot of people love wildlife. Mostly, that means cute furry mammals. When it comes to reptiles like snakes and lizards, the list of love gets shorter. But there’s at least one big exception. People love the Texas Horned Lizard, the official state reptile.

[Nathan Rains] … Well, they’re just an iconic species to Texas. Everybody has some kind of cultural affinity for horned lizards. They grew up with them, they saw them, it’s the state reptile. It just holds a special place in Texan’s hearts…

Hope and love for the Texas horned lizard…coming up on the podcast.

Quite a few older Texans recall seeing little dinosaur-like horned lizards, or even playing with them as child. Once common across much of the state, Texas horned lizard numbers have dwindled in recent decades. There are likely many reasons. For one, the imported fire ant is outcompeting the native harvester ant, a preferred food of the horned lizard. And, with this species, as with many others, habitat loss is a big factor. Yet there is hope for the horned toad. Our story begins at Mason Mountain Wildlife Management Area northwest of Austin, where scientists are working to bring back the state reptile.

Tom Harvey takes us there…

[Nathan Rains] We are putting these harmonic radar diodes on these hatchlings and this is how we, how Dr. Jim tracks ‘em…

[Tom Harvey] For 10 years, Texas Parks and Wildlife biologist Nathan Rains has been part of a team testing ways to bring back the horned lizard, working with zoos in Fort Worth, Dallas and San Antonio. They’re trying to reintroduce lizards to places where they once lived. Mostly, those reintroduction efforts have happened at state-owned wildlife management areas like Mason Mountain and Muse Wildlife Management Areas. Here, habitat management and restoration have paved the way, providing “new homes” for the lizard. Early before dawn on an October morning, Mason Mountain wildlife biologist Jim Gallagher is getting ready to release horned lizard hatchlings raised at the Fort Worth Zoo.

[Jim Gallagher] So, this is one of the harmonic radar tags that we attach to the little hatchlings. It’s basically a piece of mylar plastic with some embedded antennas in it, single diode. Weighs very little, much less than a gram. The idea is that it absorbs the, the radio signal that’s being transmitted by this hand-held unit, and then reflects a harmonic signal back to the antenna so you can pick up that same signal. They’re, they’re not individually identified. All they’re doing is reflecting that same signal, so everybody sounds exactly the same. What that sounds like is that… [BEEPING] If you are close enough, it starts sounding like that. And then it’s just a question of turning the volume down enough, you actually figure out where that tag is and what we’ve discovered in the field is you can actually tell which direction the tag is facing cause you can see here, it’s lined up the same direction as the antenna. You get a good signal. Turn it 90 degrees, no signal. So, I know which way that tag’s facing when I’m going out there looking for these little lizards and they’re hiding under the grass, most of the time I cannot see them. But at least I can get a hint. I know which way the tag’s facing, so I know which blade of grass I have to lift up to look under to see where the lizard is. [BEEPING].

[NATHAN] We are trying to evaluate dispersal. How far they go, what type of habitat they spend their time in, and how long they survive…

[JIM] It’s surprising. It’s the third year we’ve released hatchlings. And you would think that they would react kind of the same from year to year, but they don’t. Last year, the ones we released, that had tags on them anyway, pretty much all hung out in open grass and weed areas. They stayed away from the brush. This year, well the guys we released last month, three quarters of the tagged animals are hanging out right at the margins of the brush clumps. And the other quarter are out in the grassy, weedy open stuff. So, they’re doing something different this year. Is it simply because of the difference in the growing season between last year and this year? Is it a difference in where the food supply is? We really don’t know. We’re recording a whole bunch of firsts with this project. To our knowledge, when we released those guys last year, it was the first time captive-bred hatchlings had been successfully over-wintered. Okay, and then, just prior to the release last month, I did see at least one individual from that release last year, so that’s another first that captive-bred hatchlings were released and survived a year from release. The first time we know of that that’s happened. Um, the handful of studies that we got looking at natural mortality rates, they’re very, very high. Um, typically, about 80 percent of the young of the year are gone before the end of the year. So, you know, we didn’t really expect to see vast numbers of them hanging around from one year to the next. The fact that we got to see some hanging around from one year to the next, is, is pretty remarkable. So, it, it gives us hope.

[Tom Harvey] By around 9 o’clock, all the lizard hatchlings have tracking tags, everyone has gathered, and it’s time to go release lizards. News reporters and photographers from Austin watch and snap photos as hatchlings get released by Vicky Poole of the Fort Worth Zoo. It’s a trick to see the little lizards on the grassy ground—they’re only about an inch or two long—and everyone steps slowly and carefully to avoid squashing them.

[VICKY] You see how easily they blend in?

[REPORTER] Yeah, they really do.

[VICKY] Here, do you want to see something that’s really awesome? This one here, he got in and he sand fished. He’s buried right there.

[VICKY] Right on the surface.

[VICKY] See this guy, and that guy, there’s one right here.

[REPORTER] Oh, don’t move. Why would his mouth be open?

[VICKY] So, sometimes they’ll open their mouths when they are trying to cool themselves increasing their service area. Their mouth is moist, it gets the breeze that blows across it. It helps dissipate heat.

[JIM] If you watch them during the course of the day, there’s a whole suite of behaviors that show up. The first one you’ll see is posturing. Rather than sitting broadside to the sun, they’ll either face away from the sun or directly toward the sun so they’re exposing less surface area. Then you’ll see them start to, they start perching up on their tiptoes, get their belly up off the ground, that’s usually when you start seeing gaping, with their mouth open.

[REPORTER This little guy is doing that.

[JIM] And then these little guys aren’t the ones we normally see, but the adult lizards actually crawl up into brush and trees during the day because it’s, the surface of the ground is, yeah, you can’t live on that.

[Tom Harvey] This pilot project at Mason Mountain is promising. Yet it would take a lot more resources, people and money to do horned lizard restoration on a large scale, to really bring the species back. That might come from a federal proposal called the Recovering America’s Wildlife Act, a bipartisan bill proposed by Republican and Democrat cosponsors in congress. As this story was produced, the bill had more than 170 cosponsors, including more than a dozen Texas members of congress. By the time you hear this, that bill may or may not have passed, but if not, there will be something like it in the future. This is only the latest in ongoing efforts by thousands of grassroots conservation groups to increase wildlife conservation funding. I asked Nathan [Rains], if a proposal like this passes, what would it mean for the Texas horned lizard?

[TOM HARVEY] If the Recovering America’s Wildlife Act passed, what would be the first thing you would do if you had a lot more resources?

[NATHAN] We would expand the zoo’s capacity. We would have more infrastructure, you know, housing for them, internal and external food. Food would be a huge component. At some point, if we could be successful, we’d like to expand some other wildlife management areas or state parks. Getting onto private land raises a whole new crop of issues. Who would get them first?

[JIM] Even beyond that one, it’s where do you go first. If you look at the ecology of the critter in the state. You know, we know where their core range is, where they’re still doing well. Okay. We know where they’ve disappeared from. You don’t immediately jump from where they’re plentiful to 200 miles away where there hasn’t been one in 50 years. This is a good strategy. If we could start here and get it to work here and let it spread out from here, to the surrounding private lands, that’s good.

Thanks to Tom Harvey for taking us to Mason Mountain Wildlife Management Area …and hats off to the wildlife biologists and zoo scientists who are working with such passion and determination to bring back our state reptile.

We record at The Block House in Austin, Texas. Joel Block does our sound design.

[NATHAN RAINS] Well, they’re just an iconic species to Texas. Everybody has some kind of cultural affinity for horned lizards.