The Life of a Park Ranger 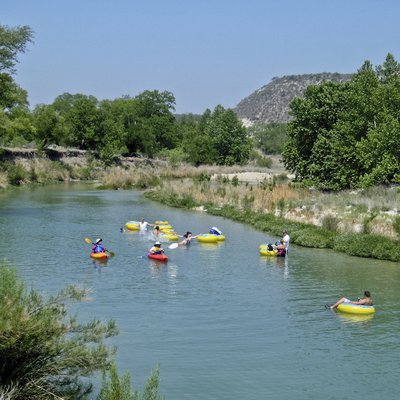 At Texas State Parks you’ll find adventure and interesting folks—like park staff that keep the places humming. On the podcast, producer Abe Moore takes us to South Llano River State Park, where we meet a fascinating man who not only works at the park, but lives there, too.

No matter what you are looking for in an outdoor experience, you can almost always find it at a Texas State Park. While you’re there you’ll also meet some amazing people, who keep the parks humming. And you’re gonna meet one of them today on the podcast.

When you visit a Texas State Park, you’re there to immerse yourself in the natural world, whether you’re camping, hiking, biking, fishing…or whatever it is you do to connect with the outdoors.

And if you’re lucky, you even have good fortune to meet and interact with one of our uniformed park personnel. You might wonder if any of them actually live at these amazing places. Fact is… it’s not uncommon for state park managers to live on site.

Abe Moore, one of my colleagues from the award-winning Texas Parks and Wildlife Television series introduces us to a man who works at South Llano River State Park, and also calls it his home sweet home.

[Abe Moore] I did a story at South Llano River a while ago.

[Scott Whitener] The main draw is probably the river, which is why it gets its namesake.

[Abe] And I met the park manager here Scott Whitener.

[Scott] And even though you can be sitting in the campground with fifty other campers, you only walk a hundred yards and you are going to be all alone in the woods.

[Abe] And his passion and energy was just amazing, and I just thought, what a character, he lives here at the state park, he works here, he plays here, so I just thought he might be a fun story. So that’s what we’re doing.

[Abe] Scott's the kind of guy that would be right at home in the pages of any outdoor catalog.

[Scott] Leaving home and open the gate, I think I can count the paces, about twenty-five feet.

[Abe] The parks headquarters is an old ranch house

[Abe] And Scott manages a staff of seven to nine folks depending on the time of year.

[Scott] Open the office up so we can start getting everybody checked-in.

[Scott] How you doing sir!?

[Camper] How are you?

[Scott] You gotta make sure you are there for your people, sometimes that means I’m the front desk guy, last week it was when I got a sick, sick employee, I’m the only one here, it doesn’t matter how busy it is you still gotta serve people that walk through the door.

[Scott] So, would you prefer something on the back side? Like over here where the bird blinds are. Ok let me see if I can move you somewhere over there.

{Birds flap around at bird blind}

[Abe] I’m surprised you’re not a birder Scott, how come?

[Scott] I didn’t start out a birder…

{Birds flap around at bird blind}

[Scott] I’ve learned more about birds in the two years I’ve been here than I think I knew from my first forty-three years of life. And, I learned the hard way by thinking certain birds weren’t real.

What do you mean?

[Abe] Scott’s road to South Llano River State Park was a windy one.

[Scott] Well I moved to Austin when I was nineteen, I guess. I finally got a job on an Alaskan fishing boat.

[Scott] Trim all the trees on these forest roads.

[Scott] And hit a bunch of national parks.

[Scott] Spent three months travelling in Guatemala by myself. Kinda all building up to one thing which was, I’m gonna have to figure out something eventually that I’m going to do for the rest of my life. And I did all this before I turned thirty.

[Abe] He eventually went back to college, got a degree, and started teaching.

[Scott] I taught kids with autism, cerebral palsy, and ugh, I won teacher of the year.

[Scott] Yeah, I won teach of the year, and then the next year I quit cause of stress.

[Abe] So, at thirty-nine. He took a nine dollar an hour seasonal clerk position at Enchanted Rock State Natural Area.

[Scott] Literally the day I started at Enchanted Rock, it was like I want to know how you are doing this, and I want to learn every aspect of how this works. My former supervisor just said, ya know, Scott this isn’t rocket science. It’s about how you deal with people, I stopped letting all the technical stuff get to me, and started well I can work with people.

[Scott] So were walking towards the camping loop where everybody down in this one little section of the park of fifty-eight some camp sites.

[Scott] The dog is Lulu, Lulu the wonder dog.

[Scott] Kind of my nightly thing is just to take the dog, gives me an excuse, not only to walk the dog, but to check on people that are staying with us.

[Scott] Ah, Steve! What’s going on Steve, how are you sir! Welcome back, welcome back dear!

We’re glad to be back.

[Scott] Karen and Steven Grasty, they are veteran park hosts.

[Steven] Got a lot of experience under our belt. Ha-ha…

[Abe] So, tell me for someone that’s new to this park, what’s this park like?

[Steven] Beautiful, in the spring when the birds start coming back and all that it’s, it’s beautiful, and you’ve got some deer coming in, ya know in and out, so!

[Abe] All right, thank you for your time.

[Abe] And on this walk it calls to Lulu, too.

[Scott] Ya know, this is the worst part about walking the dog and having to follow your own rules.

[Scott] Out of that little dog, I’m telling you man! This dog is regular.

[Abe] And tonight, even after a quick dog walk there’s still enough time to get in a bike ride.

[Scott] It takes ten seconds to get to the trailhead from the back door.

[Scott] That’s one of those nice things about living in the park, that’s how far I have to get to get on the trail.

[Abe] Is this the way to your favorite spot?

[Scott] Oh absolutely, as soon as we pass one trail you’re in my favorite spot I’d say.

[Abe] These trails twist and turn and seem to go for miles.

[Scott] Ya know if you’ve got 18-19 miles of trail in the backcountry, you rarely see a person which what it’s all about.

[Abe] Which is good for Scott, he needs the miles to prep for ultramarathons.

[Abe] I guess you’re not training now are you or you are?

[Scott] I guess you’re always training, you’re just training to finish. People ask me before, it’s like so how does it feel like running fifty miles. Well it hurts, it hurts. I will admit I’ve never come in dead last but, uh, I will always finish. It just might not be pretty.

[Abe] And as the sun sets on my visit, we finally arrive at one of Scott’s favorite spots.

[Abe] How far if you wanted to do the primitive would you have to walk to get back here, a mile, mile and a half?

[Scott] A little over a mile and a half, yeah. I always tell people to do bike in camping. If you can fit a backpack with a tent on your back, just ride everything in it’s much faster. Most people look at primitive as the afterthought, cause they couldn’t get anything else that’s more convenient. And I would say this would be my ideal campsite, it’s peaceful back here.

[Abe] I hadn’t thought about that, but yeah, this is the perfect bike in camp spot. I don’t want to tell anybody.

[Scott] The wonderful thing about South Llano River State Park and why people should care about this place, it’s uh, you can go to the river and I think that’s what people think is the draw, they don’t think about the other twenty-one hundred acres that’s back there, that’s just waiting to be tapped into. That’s what’s so special about. Because there is space to be had out here, and its solitude and to me that’s nature.

Want to experience the peace and solitude that Scott’s talking about? Then check out the South Llano River State Park page on the Texas Parks and Wildlife website and learn about all the park has to offer…and make your camping reservations online, too.

Meanwhile, I hope you’ll have no reservations when it comes to contacting us at underthetexassky.org to share your feedback and story ideas.

My thanks to Abe Moore for introducing us to South Llano River State Park and Scott Whitener.

We record the podcast at The Block House in Austin, Texas. Joel Block does our sound design.

We receive distribution and web support from Susan Griswold and Benjamin Kailing.

[Scott] Leaving home and open the gate, I think I can count the paces, about twenty-five feet.