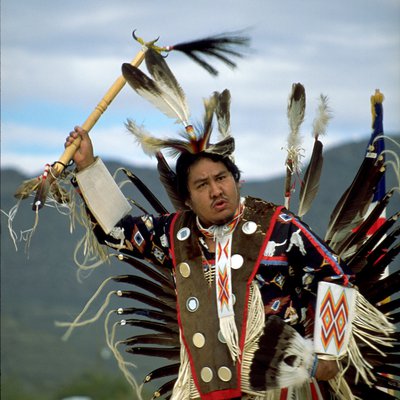 [SPONSOR] Under the Texas Sky is Brought to you in part by Toyota, a proud supporter of Texas Parks and Wildlife Programs. Toyota, Let’s Go Places.

[NARRATION] Long before Europeans arrived in the land we now call Texas, Native Americans inhabited most of our state. From the Gulf Coast to the Llano Estacado, there were empires, functioning cities, and trade networks used by a multitude of Native American Tribes. There were the Karankawa, Alabama-Coushatta, Caddo, Comanche and Apache, Cherokee, Kiowa and Kickapoo, Tonkawa, Waco and Cheyenne, just to name a few. Sadly, the arrival of Europeans and Anglo-Americans created conflicts that would ultimately wipe out millions of American Indians and decimate the bison herds they depended on for food, utensils, and clothing. The last of the free Plains Indians, the Comanche, led by Chief Quanah Parker, surrendered to the U.S. Army in 1875 and settled on a reservation in Oklahoma.

On the Wanderlist, we’ll speak with Texas Parks and Wildlife’s Regional Interpretive Specialist Cassie Cox, and Archeology Lab Director Aina Dodge. November is National Native American Heritage Month. Cassie and Aina will share how Native American heritage is recognized and being preserved in Texas State Parks. Stay with us.

[NARRATION] From Texas Parks and Wildlife, this is Under the Texas Sky’s Wanderlist. I’m Randall Maxwell and joining me by phone are Cassie Cox, Regional Interpretive Specialist for West Texas State Parks in Alpine, Texas, and Aina Dodge, Archeology Lab Director in the State Parks Division, here at our Austin Headquarters.

[RANDALL] Cassie, I’ll start with you. We’re in the month of November, and this is National Native American Heritage Month. Tell me about your area where you’re located and what the historical significance of Native Americans are in your region.

[CASSIE] Absolutely. I’m out here in Alpine, Texas and I work in Fort Davis, so in the Big Bend and the Davis Mountains area of West Texas, and this area is claimed as homelands by the Mescalero Apache and Ysleta del Sur Pueblo, among other tribes. I just want to remind people that the places that we live and we work and we play, were once and still are homelands for different Native American tribes. And these lands were either taken from those people or acquired in a treaty. And many of these situations resulted in the forced removal of tribes from their native homelands. So we should strive to be more sensitive and understanding of that difficult past.

[RANDALL] Good point. Aina, could you tell us about the Central Texas region where we are located here?

[AINA] Yeah, sure. In Central Texas, there were many, and are many Native Americans who live here and have relationships with this part of the state. The Tonkawa tribe and the Comanche Nation, among others. There’s probably ten more tribes. The Alabama-Coushatta, the Caddo, the Kiowa. They all have strong connections to this part of the state.

[RANDALL] So Aina, in which parks do we have Native American affiliations?

[AINA] All of them. Texas has a very diverse population. All of our parks were at one time, or are now, affiliated with Native American tribes. The diversity of the state is reflected everywhere we go, and most of the Tribal Nations, their governments are now outside of Texas. But they do keep that strong relationship with the state and the lands here. Regardless of whether the groups live in Texas or not, those strong cultural ties to their homelands are very important. One of the most important parks to Native Americans is Palo Duro Canyon State Park. It contains cultural sites which are very important to modern tribes as it was the location of the final battle of the Red River War. In September of 1874 the U.S. Army charged into the canyon where several Native American tribes were gathered in a combined village for protection during the winter, and it was there that the U.S. Army soldiers captured and burned the village, while Indian warriors fought to protect women and children attempting to escape the canyon. And the descendants of those survivors are still alive today.

[RANDALL] I just can’t imagine during that time, you know. What were they thinking, you know, is happening to their homeland? And here in this beautiful picturesque color of Palo Duro. It just must have been devastating.

[AINA] Absolutely was, and that’s why it’s so important that we maintain a relationship with Native American tribes who have that relationship to that place, at that sacred place frankly. And we do, we try to keep, you know, an open dialog about what happened there, and be able to tell the story in a sensitive way.

[RANDALL] Well, let me shift back to Cassie right now because I know out in West Texas we have Hueco Tanks State Park and Historic Site. Cassie, can you you shed a little light on that?

[CASSIE] Yeah, so Aina mentioned telling the stories of our Native American tribal affiliations in our parks, and so at Hueco Tanks, that is another example of a place where we are currently doing that. So there are several affiliated tribes out there. This is Hueco Tanks State Park way out in El Paso, and those include the Mescalero Apache tribe where are in Southern New Mexico. The Ysleta del Sur Pueblo who have facilities just right outside of the park, as well as the Ysleta del Norte Pueblo, the Kiowa and Comanche tribes. And some of these tribes have participated in an annual event that the park has called The Interpretative Fair where they public presentations and tours, and it helps these Native American tribes tell their stories, their family and ancestral connections to the site in their own voices. And some of these tribes have also been able to, through tours and guiding park staff around the park, to provide more insight to the meaning of some of the rock art symbols that are out there and symbols that they recognize that has been passed down through generations. So it’s great to be able to learn with them and share with them, and then, you know, help other visitors to the park recognize that importance of the things that they are seeing, from modern voices.

[RANDALL] And Cassie it reminds me of kind of the Spanish Missions in Texas, you know, like Goliad for instance.

[CASSIE] Yes, yeah, and Goliad State Park and Historic Site is a symbol for us of the missionizing of Texas by the Spanish, who’s goals were to spread Catholicism, but also build support against the French, who were also trying to claim parts of Texas. And so, this is a site where the stories about Native Americans are difficult to tell. But we need to have these conversations. It was a painful moment in their existence, because this religion and these ideals were being forced upon them, and these difficult have helped shape Texas today.

[RANDALL] Well, the story of Texas is worth getting correct isn’t it?

[CASSIE] Absolutely. We want to hear all sides, all voices in our story of Texas.

[RANDALL] I’ll throw this both to you. Is there anything else you’d like to say about Native Americans in Texas State Parks? Aina?

[AINA] I just want to remind everyone that North America has been home for people for over 13,000 years. We know their history because of the objects that they left behind. The earth ovens for cooking plants, spear points, dart points, arrow points and other hunting tools. But our Native American Tribal Nations are still here today living in the modern world. They hold public office, contribute to music, art, business, agriculture and so much more.

[CASSIE] Aina is absolutely right, and in Texas State Parks we want to do a better job of sharing the stories of our affiliated Tribal Nations by continuing to partner with them, to hear their stories of the importance of our public lands, and help them elevate their voices.

[RANDALL] Well thank you so much for joining us on this podcast. I really appreciate your insight, and I know our listeners have learned a lot more. Especially as we celebrate National Native American Heritage Month.

[SPONSOR] Support from Toyota allows us to bring you stories from Under the Texas Sky. Toyota has been a proud sponsor of the Texas Parks and Wildlife Foundation since 2002, providing generous support to help the department provide outdoor programs for Texans and to conserve the wildlife of the Lone Star State.

14 [NARRATION] We’re done wandering for this podcast…but Louie Bond and I—or our executive producer, Cecilia Nasti—will be back with more fascinating things to learn about our great state of Texas.

Before heading to any state park, historic site or natural area, call ahead.

Also, keep an eye on the Under the Texas Sky Instagram account, which is @Underthetxsky. We’ll use it to notify you of some of the Wanderlist subjects we plan to cover, and give you a chance to ask questions, some of which we’ll answer on the podcast.

Under the Texas Sky is a production of Texas Parks and Wildlife. We produce our Wanderlist series in partnership with Texas Parks and Wildlife Magazine in the Media Production Studios in Austin, Texas. Yours truly did our sound design. Whitney Bishop does our social media. And we get distribution and web help from Susan Griswold and Benjamin Kailing.

Until next time…keep on wandering Under the Texas Sky. I’m Randall Maxwell.