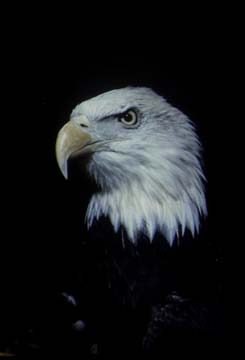 Description
The Bald Eagle is one of nature's most impressive birds of prey. Males generally measure 3 feet from head to tail, weigh 7 to 10 pounds, and have a wingspan of 6 to 7 feet. Females are larger, some reaching 14 pounds with a wingspan of up to 8 feet. Adults have a white head, neck, and tail and a large yellow bill.
Life History

Bald Eagles are opportunistic predators. They feed primarily on fish, but also eat a variety of waterfowl and other birds, small mammals, and turtles, when these foods are readily available. Carrion is also common in the diet, particularly in younger birds. Bottom-dwelling fish like catfish and carp tend to occur more frequently in the diet. It is thought that the downward visual orientation of bottom-feeding fish makes them more vulnerable to eagle attacks than surface sight-feeders, which are more aware of movements from above. Eagles capture fish by extending their talons a few inches below the water's surface. Therefore, live fish are vulnerable only when near the surface or in shallows. Studies in Texas have shown that eagles commonly eat coots, catfish, rough fish, and soft-shell turtles.

In Texas, Bald Eagles nest from October to July. Nests are constructed primarily by the female, with the male assisting. The typical nest is constructed of large sticks, with softer materials such as leaves, grass, and Spanish moss used as nest lining. Nests are typically used for a number of years, with the birds adding nest material every year. Bald Eagle nests are often very large, commonly measuring 6 feet in width and weighing hundreds of pounds. Eagles can have one or more alternative nests within their territories.

Peak egg-laying occurs in December, with hatching primarily in January. The female lays a clutch of 1 to 3 eggs, but the usual clutch is 2 eggs. A second clutch may be laid if the first is lost. Incubation begins when the first egg is laid and usually lasts 34 to 36 days. The young generally fledge (fly from the nest) in 11 to 12 weeks, but the adults continue to feed them for another 4 to 6 weeks while they learn to hunt. When they are on their own, young Bald Eagles migrate northward out of Texas, returning by September or October.

Nest surveys in Texas from 1981-2005 have shown that greater than 80% of the active nesting territories successfully produced young, with production averaging greater than 1 young per active nest found. Studies show that at least 70% of the juveniles survive their first year. Causes of first year mortality include leaving nests prematurely, disease, lack of food, inclement weather, and human interference. Bald Eagles reach sexual maturity at 4 to 6 years of age; however, they have been known to successfully breed at 3 years. They are monogamous and are believed to mate for life; however, if one of the pair dies, the surviving bird will accept another mate. Bald Eagles are believed to live up to 20 years or more in the wild.

Distribution
The Bald Eagle, our National Symbol, occurs throughout the United States, Canada, and northern Mexico. Bald Eagles are present year-round throughout Texas as spring and fall migrants, breeders, or winter residents. The Bald Eagle population in Texas is divided into two populations; breeding birds and nonbreeding or wintering birds. Breeding populations occur primarily in the eastern half of the state and along coastal counties from Rockport to Houston. Nonbreeding or wintering populations are located primarily in the Panhandle, Central, and East Texas, and in other areas of suitable habitat throughout the state.
Threats and Reasons for Decline

Habitat loss and pesticide intake over the past 200 years are the factors most consistently associated with declines in Bald Eagle populations with the ultimate threat to Bald Eagles being people. Human populations are expanding in Texas. People are attracted to water which is the primary areas for eagle nesting and foraging. People also consume huge volumes of fresh water which reduces the amount of water available in river and wetland systems. Some eagles are showing more acclimation to the presence of people, but most are found in more rural settings with minimal human disturbance.

Shooting has long been recognized as a major human-caused factor in the decline of Bald Eagles. Although primarily fish and carrion eaters, eagles were thought to be a major threat to chickens, livestock, and game animals. Consequently, many were killed by farmers, ranchers, and hunters. In 1940, Congress passed the Bald Eagle Protection Act, which made it illegal to shoot or harass eagles. In 1969, Bald Eagles gained further legal protection under federal endangered species laws. With heightened public awareness and sensitivity to the plight of the Bald Eagle, coupled with strict laws, shooting mortality has declined from 62% of total reported deaths from 1961-1965 to 18% from 1975-1981. Although this downward trend is encouraging, shooting mortality could still be a limiting factor, particularly in remote areas.

Human disturbance can also be a cause of population decline. Activities such as logging, oil exploration and extraction, construction, and recreational activity certainly do disturb eagles in some instances. However, the impact of these disturbances is highly variable, depending on the activity, its frequency and duration, its proximity to areas used by eagles, the extent to which the activity modifies the habitat or its use, and timing in relation to the reproductive cycle. Also, some birds are more tolerant of disturbance than others, with adults generally less tolerant than immature birds. Despite this variability, disturbance near nests have caused nesting failures.

Finally, the most dramatic declines in Bald Eagle populations nationwide resulted from environmental contaminants. Beginning in 1947, reproductive success in many areas of the country declined sharply, and remained at very low levels through the early 1970's. After several years of study, the low reproduction of Bald Eagles and many other birds was linked to widespread use of the insecticides DDT and Dieldren. These insecticides were used extensively in agriculture and forestry beginning in 1947. As DDT entered watersheds, it became part of the aquatic food chain, and was stored as DDE in the fatty tissue of fish and waterfowl. As eagles and other birds of prey fed on these animals, they accumulated DDE in their systems.

Although occasionally causing death, DDE mainly affected reproduction. Some birds affected by the chemical failed to lay eggs, and many produced thin eggshells that broke during incubation. Eggs that did not break were often addled or contained dead embryos, and the young that hatched often died. Dieldren killed eagles directly rather than causing thin eggshells, but compared to DDT, Dieldren was probably not as important in overall Bald Eagle declines. In 1972, the EPA banned the use of DDT in the United States. Since the ban, DDE residues in Bald Eagle eggshells have dropped significantly, and a slow recovery of eagle productivity has occurred. Most populations appear to be producing chicks at the expected rate.

Of more recent concern is evidence that lead poisoning may be a significant cause of death in eagles. Chronic low levels of lead can produce nervous system disorders, affect behavior and learning, cause anemia, and increase susceptibility to disease. As laws requiring the use of steel shot to hunt waterfowl become effective, accumulation of lead in the food chain is expected to decline.

Since 1981, Texas Parks and Wildlife Department has conducted extensive aerial surveys to monitor Bald Eagle nesting activity. The 2005 survey identified 160 active nests which fledged at least 204 young. This compares with only 5 known nest sites in 1971. These numbers show encouraging trends for Texas. With continued vigilance, protection, and informed management, today's Texans can insure that future generations will have the opportunity to enjoy the sight of our majestic national symbol - the only eagle unique to North America.

In Texas, the greatest challenge for the future will be to prevent further destruction of habitat and retention of sufficient creek and river flows to support a food base for breeding and wintering eagles. The Texas Parks and Wildlife Department, in cooperation with landowners, other agencies and conservation groups, is continuing to monitor breeding and wintering Bald Eagle populations. Monitoring of nesting success is particularly important in detecting any problems associated with contaminants in the environment. Finally, appropriate management of nesting, feeding, loafing, and wintering habitat must be a priority if we are to maintain the current upward trend in Bald Eagle numbers in Texas.