The black drum is a chunky, high-backed fish with many barbels or whiskers under the lower jaw. Younger fish have four or five dark vertical bars on their sides but these disappear with age. The bellies of older fish are white but coloration of backs and sides can vary greatly. Fish from Gulf waters frequently lack color and are light gray or silvery. Those living in muddy bay waters have dark gray or bronze-colored backs and sides. Some are solid silvery gray or jet black. A length of six inches is reached in the first year, 12 inches the second and 16 inches the third. Increases of about two inches per year occur after that. The largest black drum on record weighed 146 pounds. The Texas record taken by a sport angler is 81 pounds but most bull drum caught weigh 30 to 40 pounds.
Life History

This fish is a member of the croaker family and is related to the Atlantic croaker, red drum, and spotted seatrout. A characteristic of this family of fish is the ability to produce croaking or drumming sounds with the air bladder, which is the reason for the common names croaker and drum. This ability is most developed in the black drum and anglers can sometime hear sounds from schools passing near their boats.

Small fish, under a pound in weight, are sometimes called "butterfly drum" while those of larger size, 30 pounds and more, are called "bull drum", although the large specimens can be either male or female.

Perhaps the most notable drum harvests are the annual runs of "bull" drum. In many of our deeper bays, around some jetties in the Gulf, and in some channels, large drum gather in schools before spawning. In February and March, catches of these large fish make the local sports columns in the newspapers. Some compare landing a 40-pound drum with raising a sunken log, but many anglers are devotees of this kind of fishing in Texas. It is probably the best chance many people have to land a 30 to 40 pound fish.

Unlike spotted seatrout that spawns only in the bays, and red drum that spawns only in the Gulf, black drum will spawn in either bay or Gulf or in the connecting passes. Free spawning (random release of eggs) occurs mostly in February, March, and April with some later spawning occurring in June and July. Larval drum are found in the surf and along bay shorelines in March and April, and by early summer one-half to one-inch juveniles are common in shallow, muddy creeks, sloughs and boat basins.

Young drums feed on maritime worms, small shrimp, and crabs and small fish. Larger drum eat small crabs, worms, algae, small fish and mollusks. Barbels (or whiskers) are used to find food by feel and smell. Drum often dig or root out buried mollusks and worms while feeding in a head-down position. This process is called "tailing" and creates small craters in the bottom which anglers call "drum noodles." Experienced anglers can detect the recent passage of a school of drum by the presence of many "noodles." The black drum has no canine teeth like those of the spotted seatrout, but does have highly developed pharyngeal teeth (in the pharynx or throat) which are used to crush mollusks and crabs before swallowing.

When food is plentiful and water conditions acceptable, movements are small, but long migrations in search of food and more desirable habitats have been recorded. Spawning migrations and movements toward freshwater flow are also notable. Tagging studies have recorded migrations of 245 miles in one year or less, but most distances covered were less than 10 miles.

Habitat
This species can adapt to a wider range of habitats than any other important Texas food fish. Drum are found in the clearest water of sand flats and in the muddiest waters of a flooding slough.They thrive in water so shallow that their backs are exposed, and also in the Gulf waters more than 100 feet deep. They are found in extremely warm shallow flats of the Laguna Madre during summer and survive better than many other fish in freezing weather. They are attracted to freshwater runoff of creeks and rivers, yet can live in waters twice as salty as the Gulf of Mexico. This adaptability makes the black drum available to more anglers than any other bay fish.
Distribution
The black drum is found along the Atlantic Coast from New York south through the Gulf states to Mexico. It is most abundant in Texas and is found in all bay and inshore waters and offshore in Gulf waters. The area of greatest abundance in Texas is from Corpus Christi to Brownsville on the lower coast.
How To Catch

Black drum fishing can be enjoyed by anyone at almost any time. It is a relaxing outing compared with other types of fishing which require experience, expensive tackle, boats and related equipment. Anyone can catch a drum, whatever their skills or finances. Tackle can be rod and reel, trotline, hand line or cane pole, and bait is inexpensive. Fishing can be done from piers or from the bank and the entire family can join in.

Black drum are rarely taken on artificial baits since most feeding is done by feel and smell. Cut fish, squid and shrimp are used, with peeled shrimp tails (preferably ripe and smelly) the most popular. Since feeding is done on the bottom, the basic technique is simple - put a baited hook on the bottom and wait for the drum to swallow it.

The tackle to be used depends on the size of the fish present. For small drum, light tackle is more sporting but for 40-pounders, heavy rods with plenty of backbone are needed. Use a strong single hook with line and leader of appropriate strength. For more sport, try light tackle using a single drop with no sinker, allowing the bait to move along the bottom with the current. If the bait will not sink, a few split shot on the leader will help. The absence of weight increases the fight of the fish. A conventional bottom rig with sinker and one or more drops with single hooks is most common for bank and surf fishing or for fishing from an anchored boat.

Drum will often "mouth" the bait for some time before swallowing it, so anglers must wait until the fish moves off with the bait, then jerk the rod tip up to set the hook. Drum neither jump often nor make long racing runs or any of the other things a great sport fish is supposed to do, however they are powerful and will fight all the way in. Many lines and leaders have been broken getting fish into the boat or on the bank.

For those unable to catch their own, black drum are harvested commercially from Texas bays throughout the year. These drum can be purchased in stores and fish markets for about half the cost of the "choice" fish.

In the summer months, schools of one to four pound drum can be found in shallow water. If the water is clear, the schools can sometimes be spotted, but the clear water makes the fish spooky and hard to approach. Fishermen using artificial bait might try a spoon here if they can get close enough. Schools of drum feeding in shallow water often produce a patch of muddy water. This telltale sign allows an angler to drift a boat or to wade into the school. Try cut bait or peeled shrimp here.

During the colder months, drum of all sizes frequent deeper waters and channels and the Gulf surf. They are then taken on bottom rigs along channel slopes, in the open bay and in the surf. Fishing reports from the radio or newspapers, local fish camps, bait stands and tackle shops will help identify the current hot spots.

While some prefer flounder, red drum, snapper, or some more glamorous fish, many anglers maintain that black drum less than five pounds, cleaned and prepared properly, may be better than many of these so-called "choice" fish. Many coastal restaurants noted for their seafood serve drum extensively. Fish taken in cold weather before spawning tend to be fatter and in better condition than those caught in summer after spawning. Drum weighing more than five pounds usually have coarse flesh; the larger the fish, the coarser the flesh. Rather than eating these larger drum, anglers are encouraged to release them to spawn and fight another day. "Spaghetti worms" common in spotted seatrout are present in larger drum and, while unappetizing, they are not harmful to humans.

Do not let your fish die on the stringer. Cut its throat and let it bleed. This removes much of the blood from the flesh and helps reduce spoilage.

Do not let your fish bake in the sun on the bank or on the bottom of the boat, or let it slosh around in an oily bilge. Clean it and put it on ice.

Rather than scale your drum, skin it. The skin contains most of the "fishy taste," so why save it? Besides, the scales of drum are tough and not easily removed.

Do not throw away the throat. It is easily skinned and is the best part of the fish.

Drum can be prepared in many ways, but are probably best rolled in cornmeal and fried. The flesh is solid white and not dry or oily. Remember, the main difference between excellent and poor fish is not the kind of fish, but the way it was handled and prepared.

The internet has many recipes and helpful hints on preparation for both black and red drum. Information adapted from a brochure, Black Drum in Texas, by Joe Breuer.

Other
The black drum, a mainstay in the commercial fishery, has never been fully accepted as game fish by sport anglers. Annual harvest of black drum along the Texas coast is usually more than 1.3 million pounds by the commercial fishery and approximately three quarters of a million pounds by the sport fishery. While some prefer flounder, red drum, snapper, or some more glamorous fish, many anglers maintain that black drum less than five pounds, cleaned and prepared properly, may be better than many of these so-called "choice" fish. Many coastal restaurants noted for their seafood serve drum extensively. Fish taken in cold weather before spawning tend to be fatter and in better condition than those caught in summer after spawning. Drum weighing more than five pounds usually have coarse flesh; the larger the fish, the coarser the flesh. Rather than eating these larger drum, anglers are encouraged to release them to spawn and fight another day. "Spaghetti worms" common in spotted seatrout are present in larger drum and, while unappetizing, they are not harmful to humans. 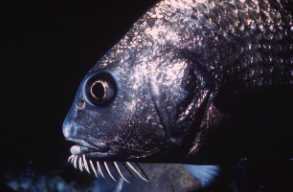