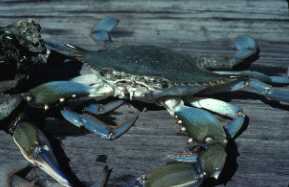 Crabs are crustaceans with five pairs of legs. The first pair is modified as pinchers and the last four pairs are walking legs.

The blue crab's carapace (or shell) is about 7 inches (17.8 cm) wide and 4 inches (10.2 cm) long. It weighs 1 to 2 pounds (0.45 to 0.9 kg) when fully grown. The back of the blue crab is dark or brownish green and is drawn out on each side into a large spine. When fully grown the spine may be more than 8 inches wide. The abdomen and lower legs are white. Crab claws are various shades of blue, but the claw tips of the female are red.

Sexes can be identified by the abdominal flap or apron. In the male it is shaped like an inverted T, but in the female it is broader.

Blue crabs eat clams, oysters, and mussels, as well as almost any vegetable or animal matter, preferably freshly dead or freshly caught food-sometimes even young crabs. Its predators include red drum, Atlantic croaker, herons, sea turtles and humans. At 12 to 18 months, blue crabs have reached sexual maturity. Females mate only once, immediately after they have molted (shed their shell) for the last time. Males mate often. When the females are in their soft-shell stage (immediately after molting), the males transfer their sperm to them for storage, and then protect them until their new shells harden.

The females will spawn two to nine months after mating, laying up to two million eggs. Spawning season is from December to October, with a peak in spring and summer. When females are ready to spawn, they fertilize the eggs with the stored sperm and place them on the tiny hairs of the appendages on their abdomen. While carrying eggs like this, she is called a "sponge" or "berry" crab. Incubation time is 14 days. The megalops (or larvae), pass through eight stages in about two months before they begin to look like crabs. Perhaps only one or two crabs survive to become adults. Blue crabs can live up to three years.

After mating, the females travel to the saltier portions of the lower bays and gulf, while males remain in the estuaries. Blue crabs burrow in soft mud or hide in sea grasses to lie in wait for prey or avoid predators. Crabs are quite aggressive-perhaps inspiring us to refer to an aggressive or unpleasant person as a "crab!" Blue crabs suffer in low oxygen conditions. Pollutants from farms, sewage treatment plants, chemicals, homes and cars can have serious consequences for blue crabs.

Parasites are common on crabs. Barnacles, worms and leeches attach themselves to the outer shell; small animals called isopods live in the gills or on the abdomen; and small worms live in the muscles. However, most of these parasites do not affect the life of the crab.

Crabs can regenerate (regrow) pinchers or legs lost while fighting or protecting themselves. The lost limb will be replaced after two or more molts. The blue crab's scientific name, Callinectes sapidus, is from Latin and Greek: calli, beautiful; nectes, swimmer; and sapidus, savory-beautiful, savory swimmer. Like insects, blue crabs have stalked compound eyes and can see in almost every direction at once.

Blue crabs are bottom-dwellers in every type of habitat from the saltiest water of the gulf to the almost fresh water of the back bays and estuaries, from the low tide line to waters 120 feet (36 m) deep.

Blue crabs live in estuaries along the east coasts of North and South America. They have also been seen in the coastal waters of France, Holland and Denmark.

Most of the crabs caught commercially are taken in crab traps. A trap is a rectangular device made of chicken wire about 2 feet wide. It has inverted funnels in the sides, through which the crab can enter, but will have difficulty leaving. The trap is baited with freshly dead fish. In some areas, crabs are also caught in trawls and by trotlines. 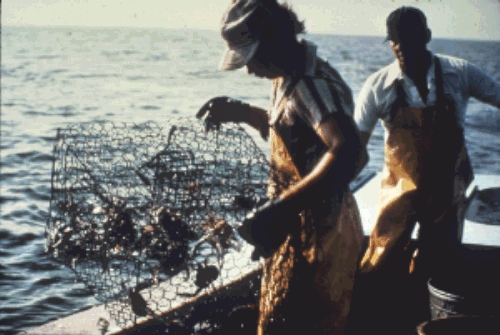 In addition to the commercial fishery, many people crab for fun. It is inexpensive and easy for all members of the family. There are no bag limits, but there is a 5-inch minimum body width as measured from spine to spine. Keeping "sponge" crabs - female crabs with spongy masses of eggs on their abdomens - is also illegal.

One of the easiest ways to catch crabs is with fish heads or chicken necks tied to a piece of strong twine about 10 feet long or long enough to reach the bay bottom. Place the baited line in water from a pier, bank, or boat and wait until a crab grabs it. When there is a pull on the end, the string is slowly retrieved until the crab is seen. A net is used to dip it out, but the crab cannot be allowed to come out of the water because it will release the bait. Patience is the key!

Blue crab meat is tasty and can be prepared in any number of ways.Crabs should be cleaned quickly to prevent meat spoilage. Dead crabs should be discarded. Crabs can be boiled before or after cleaning. To clean the crab, remove the claws by holding the body in one hand and twisting the claw off with the other hand. Next, hold the legs in one hand, insert the fingers of the other hand under the shell at the back, and pull the shell up and off. Scoop out and discard the internal organs in the center of the crab. Slice the top of one side of the body with a knife and repeat on the other side. Now scoop out the meat from the exposed chambers. Refrigerate as soon as possible!

The blue crab is the most common edible crab along the east coast of the United States and the Gulf of Mexico. Blue crabs, like shrimp, crayfish and lobsters, are members of the crustacean family. Many people love to eat blue crab. The crabs are sold live to processors who boil, pick, and can the meat, to fish houses, and to supermarkets for sale over the counter. From 1977 to 1989, the yearly catch of blue crab ranged between 6.9 and 11.7 million pounds, and was valued between $1,928,000 and $4,474,000. 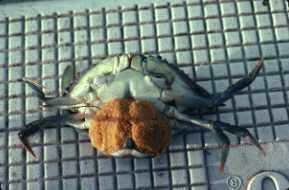