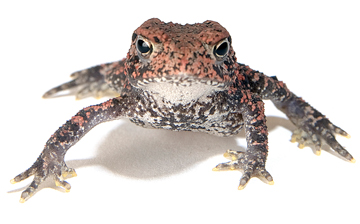 The Houston toad lives primarily on land. These toads are considered habitat specialists, requiring very specific environmental conditions to survive. They aestivate (a dormant period during hot, dry conditions similar to hibernation during cold conditions) during most of the year, burrowing into the sand for protection. Habitat preferences include forested areas with loblolly pine, post oak, bluejack or sandjack oak, yaupon, and little bluestem.

For breeding, including egg and tadpole development, Houston toads require shallow ponds or temporary water sources that persist for at least 30 days. These water sources may include ephemeral (temporary) rain pools, flooded fields, blocked drainages or depressions that hold water, wet areas associated with seeps or springs, or more permanent ponds containing shallow water. The toads do best in ponds without predatory fish.

The Houston toad is a year-round resident where found, although its presence can most easily be detected during the breeding season, when males may be heard calling. Males usually call in or near shallow water or from small mounds of soil or grass surrounded by water. Males occasionally call from wooded habitat located within about a 100-yard radius of breeding ponds. The call is a high clear trill that lasts from 20-30 seconds The call is much like that of the American toad (Anaxyrus americanus), but usually slightly higher in pitch. The American toad occurs in Texas, but north of the range of the Houston toad.

Houston toads may call from December through June. Most breeding activity takes place between January and mid-May on warmer, humid evenings (often preceded by a cold-front). Groups of calling males draw females to the breeding pond with high, clear trills. Females, responding to groups of calling males, move toward the water to mate. Houston toads are considered explosive breeders, in that they tend to breed all at once for short periods of time during the breeding season. The female lays her eggs as long strings in the water, where they are fertilized by the male as they are laid. The eggs hatch within 48 hours, and tadpoles live in the pond from 2.5 to 7 weeks, depending on the water temperature and food availability.

Once metamorphosis is complete, the emerging new toads (toadlets) are about one-half inch long and tend to stay within 3 to 5 meters (10 to 16 feet) of the pond for about 3 weeks until they begin to disperse along drainages into upland forest. Juvenile Houston toads have been found to remain within a 50-meter radius of the pond they emerged from for at least 13 weeks. Once they disperse from the pond, they spend their time feeding and growing in preparation for the next breeding season. Males generally breed when they are a year old, but females may not breed until they are two years old. Houston toads, especially first-year toadlets and juveniles, are active year round under suitable temperature and moisture conditions. Their diet consists mainly of insects and other invertebrates. It is believed the average lifespan in the wild is 2 to 3 years. 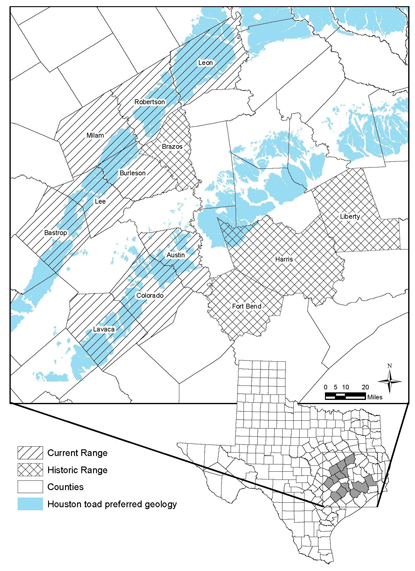 Threats and Reasons for Decline

Habitat loss and alteration are the most serious threats facing the Houston toad. Conversion of forested land for agricultural and urbanization have reduced the wooded and wetland areas that support the Houston toad. Converting ephemeral wetlands to permanent ponds also can contribute to further decline of Houston toad populations by spreading out the calling males. Conversion to permanent water not only makes them more vulnerable to predation by snakes, fish, and other predators; but also increases competition and hybridization with closely related species and more ponds on the landscape spreads out the calling males, reducing their ability to attract females to breed.

Periodic drought is also a threat, particularly long-term drought such as that experienced during the 1950's. Drought may result in the loss or reduction of breeding sites, enhance mortality of toadlets and adults, and lead to catastrophic, landscape-altering wildfires.

Clear cutting of forest that reduces canopy cover near breeding ponds and on the uplands adjacent to these ponds reduces the quality of breeding, foraging, distribution and resting habitat, and increases the chances of predation and hybridization. Conversion of native grassland and woodland savannah to sod-forming introduced grasses, such as bermudagrass and bahiagrass, eliminates habitat because grass growth is generally too dense for the toad to move freely. Dense sod also inhibits burrowing.

High traffic roads are a barrier to Houston toad movement, and toads are sometimes killed on roads. Other linear features such as pipelines and transmission lines can create barriers between foraging, hibernating, and breeding sites, especially if native vegetation has been removed.

The invasion of the red imported fire ant also has an impact on the long-term survival of the Houston toad. These toads occur in small, scattered populations, and may be more seriously affected by fire ants than species that are more common and widespread. Fire ants kill young toadlets (less than 7-10 days old) moving out of the breeding pond into the surrounding land habitat. Research shows that fire ants also may reduce insect diversity and abundance, and thus may also limit the toad's food supply.

Amphibians in general are very sensitive to many pollutants, including pesticides and other organic compounds. These chemicals may affect the toad directly, particularly in the tadpole stage, or indirectly by lowering the abundance and diversity of its food supply. Widespread use of pesticides and herbicides from about 1950 to 1975 may also have contributed to declining populations. During this period, DDT and similar non-specific chemicals accumulated in the environment, affecting a wide variety of animal life. Although threats from persistent, non-specific chemicals are not as serious today as in the past, the use of pesticides and herbicides for agricultural and residential purposes may still pose a danger for the Houston toad, but can be used successfully with guidance to reduce harm to the toad.

Although Houston toad populations are inherently separated because they exist only in areas of deep sandy soil, further fragmentation of habitat due to human activity can exaggerate the problem. Widely scattered parcels of habitat may not easily be re-colonized by distant Houston toads if extensive areas of unsuitable habitat occur between populations, or when human impacts eliminate a population.

Ongoing Recovery
Research on the life history, habitat requirements, and best management practices for the Houston Toad continues. Population surveys are conducted in areas where toads have been found and in potential habitat areas. Efforts to provide information and educational opportunities to the general public and landowners regarding life history and habitat requirements of the toad are a vital part of the recovery process. There are also several tools available to contribute to the recovery of Houston toad populations available to landowners including Habitat Conservation Plans and a programmatic, range-wide Safe Harbor Agreement for the Houston toad.
How You Can Help

You can help by voluntarily protecting potential Houston toad habitat. Conservation and wise management of native vegetation and protecting existing, shallow ponds and potential breeding sites is important in preserving Houston toad habitat. You can also help by landscaping with native plants to reduce water and pesticide use, and by proper storage and disposal of household, gardening, and agricultural chemicals. Thoughtful and effective compromises between human resource needs and habitat management can allow for the continued survival and recovery of the Houston Toad.

You can support Houston toad recovery directly by participating in voluntary conservation efforts if you have land in potential habitat (see map above), and anyone can help by contributing to the Reptile and Amphibian Research and Conservation Fund, through purchase of a Conservation License Plate, and by supporting other conservation organizations in Texas. More information is on the US Fish & Wildlife Services Austin Ecological Services Field Office Featured Species webpage FWS Focus Houston Toad.