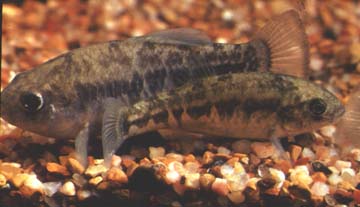 Texas Status
Endangered
U.S. Status
Endangered, Listed 8/15/1980
Description
This tiny fish reaches an adult size of about 2 inches in length.
Life History
The Leon Springs pupfish feeds primarily on the bottom, ingesting large amounts of decomposed organic matter and mud. Its diet consists of diatoms, algae, and small invertebrates. "Pit digging" has been observed, where the fish rest on the bottom of the pool and undulate their bodies to churn up the substrate. Scientists think they do this to locate buried food. Leon Springs pupfish spawn throughout the year, with females laying up to 10 eggs per day. Spawning occurs on the bottom, and males aggressively defend their territories. Their population numbers are believed to be stable at present
Habitat
Natural spring-fed marshes, pools, and slow-flowing waters with a substrate of mud and aquatic plant roots are the Leon Springs pupfish's native habitat.
Distribution 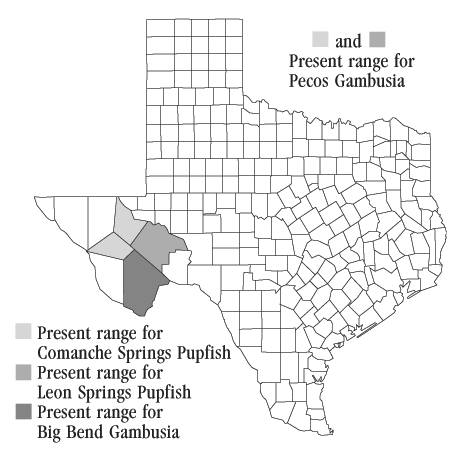 Leon Springs pupfish are found only in Pecos County, Texas.
Other
The Leon Springs pupfish was first discovered in 1851. The fish was originally found at Leon Springs, a spring system that once flowed in the Leon Creek drainage about 6 miles west of Fort Stockton. In 1918, the area where the fish was first collected was inundated by Lake Leon. By 1938, this fish could no longer be found in the area where it was first discovered. In 1958, Leon Springs went dry due to groundwater pumping in excess of aquifer recharge. From 1958 until 1965, the Leon Springs pupfish was thought to be extinct. The fish were rediscovered in 1965, when they were collected from Diamond-Y Spring, located about 10 miles north of Fort Stockton. The major threats to this species include habitat loss from declining springflows and reduced surface waters, competition with introduced species, and hybridization with introduced fishes.