Search for quail hunting opportunities on public and leased land with an Annual Public Hunting Permit.

*Gulf Prairies 2013 data correction: In an effort to improve internal efficiency and communication, TPWD migrated to a new quail survey database in 2020. At this time, all data were reviewed for accuracy. In the course of this review, 2 errors were found in the 2013 Northern Bobwhite quail count dataset. As a result of correcting these errors, the mean number of quail per route in the Gulf Prairies changed from 10.78 (incorrect) to 9.70 (correct) in 2013. To date, this is the only error we have identified.

This region experienced good weather conditions from late winter through early spring. Staff reported frequent calling activity early on but relatively few broods. By mid-summer temperatures had consistently pushed over 100 degrees and most nesting activity was curtailed. With low breeding stock from last year and a shortened nesting season this year, bobwhites in the Rolling Plains were never able to gain momentum in 2020. While there are reports of ranches and counties primed to run dogs and see covey rises, most of the Rolling Plains will again experience below average hunting conditions.

The average number of bobwhites seen per route was 3.25 compared to 5.3 last year. This is well below the 15-year mean of 14.3. Public hunting opportunities can be found at the Gene Howe and the Matador Wildlife Management Areas (WMA) where staff are reporting some late season breeding resulting from timely rainfall. We expect these WMAs to provide average public hunting opportunities. As always, scouting ahead is a good strategy to ensure a good experience. 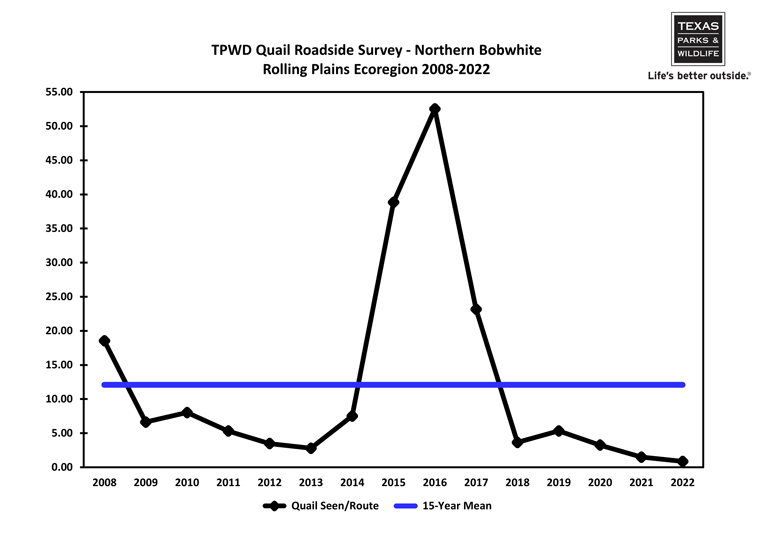 Despite below average roadside count numbers, South Texas is showing the most promise to buck statewide predictions, at least in some areas. Reports from the Coastal Sand Plain (Kleberg, Kenedy, Brooks counties) are encouraging in terms of range conditions and bobwhite activity (good chick production). Additionally, reports from Hebbronville and Brooks counties suggest summer and hurricane rainfall buoyed quail populations; where some ranch managers have expectations of good to above-average hunting conditions. Farther west/north, ranches have generally been drier. Folks in Atascosa, Dimmit, and Frio counties are tempering expectations; suggesting slightly below average conditions.

The average number of bobwhites seen per route was 3.8 compared to 13.8 last year. This is below the 15-year mean of 9.1 and suggests a below average hunting season for the region as a whole. The Chaparral and Daughtrey Wildlife Management Areas provide public quail hunting opportunities. Scouting and a few phones calls will likely go a long way this year in South Texas. 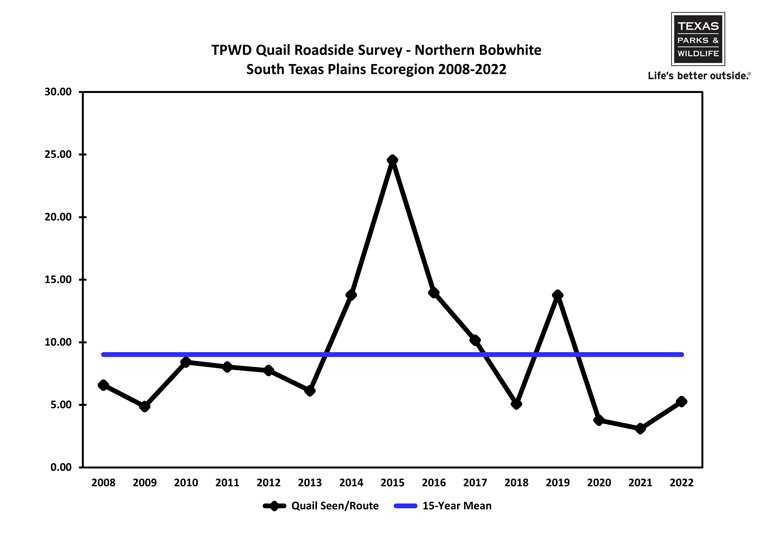 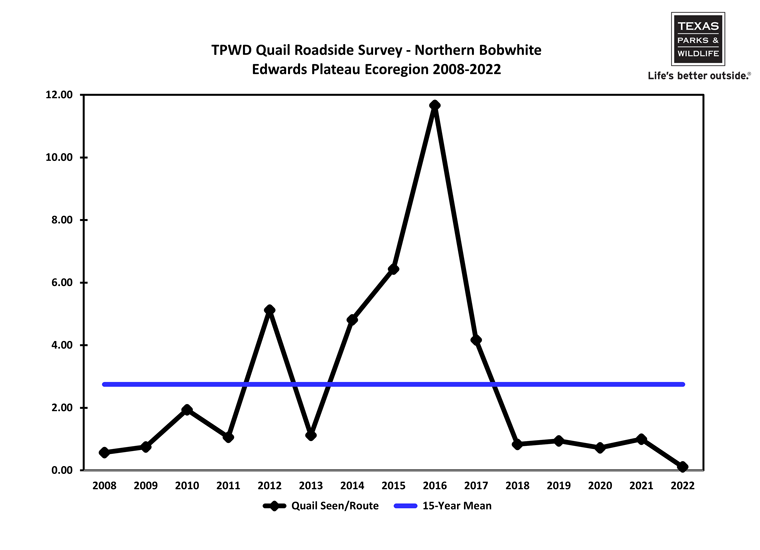 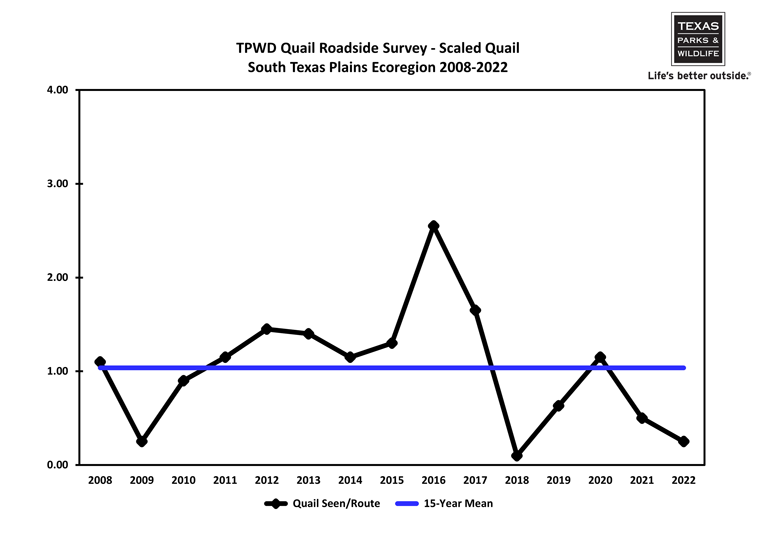 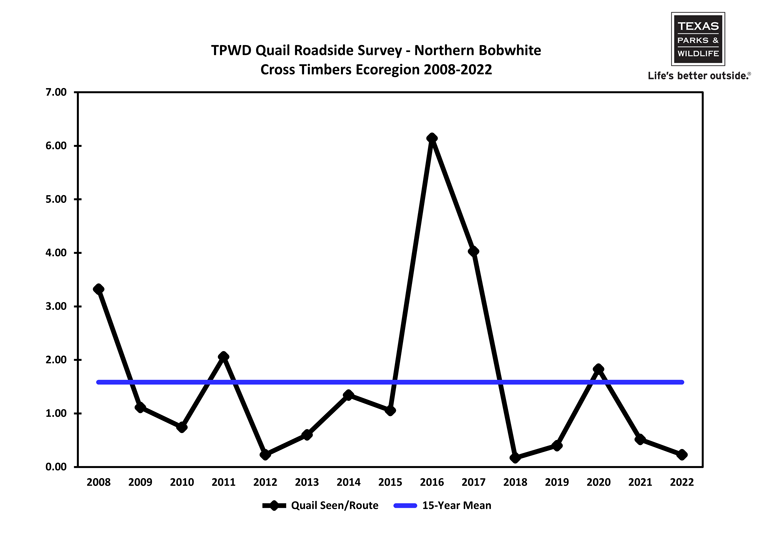 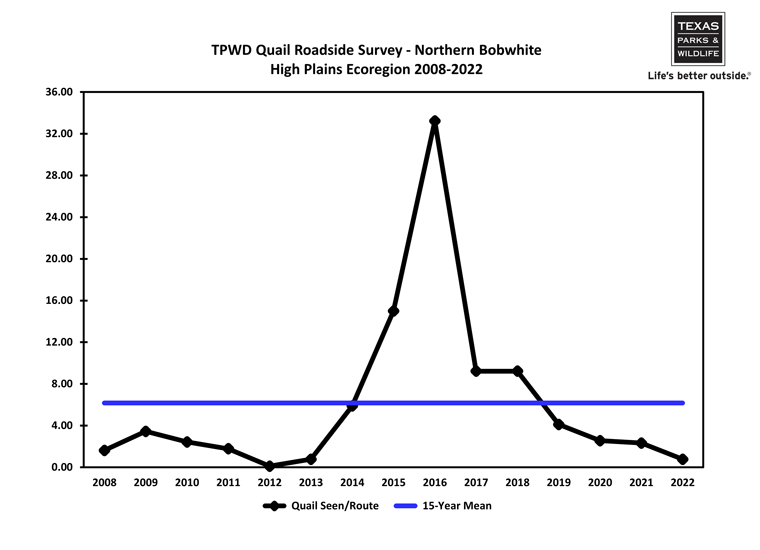